Like many artists, I keep a journal/sketchbook.  I started this practice in earnest nearly 15 years ago, when, tired of buying a new sketchbook only to end up giving it to my children to draw in, I decided to keep the sketchbook no matter what.  I gave myself permission to make the “worst junk in the world” as Natalie Goldberg said.  I didn’t judge what I put in the book, I didn’t tear pages out, and until recently I didn’t go back into old pages to rework them or cover up stuff I decided was too personal for possible public consumption.

My journal has been idea generator, confidant, and catch-all over the years.  I put it aside three years ago after the tumultuous spring, summer, and fall of surgeries, job losses and meltdowns.  I missed it, a lot.  I kept trying to come back to it, because I knew that working in such a safe space would help me heal from all the trauma my family and I had been through.

Finally I found the wonderful book The Creative Entrepreneur, by Lisa Sonora Beam, and by chance she was offering a summer special on her online journal workshops.  I signed up for the PowerFULL Magical Visual Journal workshop, found a wonderful book at a local art supply, and I was off.  Over the course of the past three months I worked that book until it was full, and in the process I was creating more work than I have created in a very long time, having the time of my life, and making work that I wanted to share with the world.

Selling completed art journals is probably possible, but not something I want to do at the moment, and I loved some of the work so much that I wanted to take it “offline” as it were and make some free-standing work.  The watercolors I posted last month inspired some such paintings, and now I have also expanded the repertoire to work on canvas.

Untitled, in process.  The background is a collage of color copies of a photo I took.  I then painted the image on using India ink, and after that dried, I went back in with acrylics.  The faces on the underlying photo aren’t as obvious in person, I was surprised and pleased when they popped out in the photo.  I think the canvas size is 10” x 20” but I am not positive. 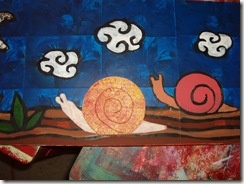 Here I am auditioning the piece with a separate snail I made by sewing unryu paper and painted paper to a Pellon base and then trimming.  I wasn’t sure that I wanted to put him (her?) on, but after seeing the photos I think that I will attach this snail to the piece. 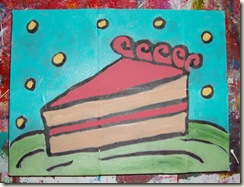 This piece is made in the same manner, but I used copies of an old family photo as the base.  One thing I’m learning in this process is that it is easier to “read” the ink drawing if the base image is color instead of black and white.  The lines tend to get lost in the darker areas of the photo on a black and white image.  It is on a canvas that measures 6” x 8”.

Izzy also got into the act and has been painting also.  We are planning at Etsy update, first tomorrow for some watercolors, then around October 15 with sculptures. 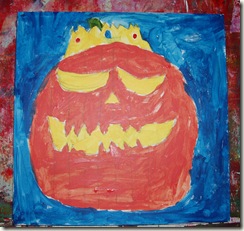 Scary new territory, but fun, especially when you have such an enthusiastic studio mate working by your side.  I already have the next two pieces planned, and am looking forward to heading back to Blick for some larger canvases.

I love the watercolors you posted. Especially the raven...and the koi.
I just started a sketchbook again for the first time in...five years maybe? 10? I had forgotten how cool it is when a little thing you see inspires you to put something down on paper. (And yeah, I got the Little Bird her own so she wouldn't draw in mine...)

It took me 3 kids to realize I could let the little one have their own separate stuff. Now my son and I spent several hours in the studio together on a regular basis. We are both much happier that way! :)

Andi Stern
I make art, so you don't have to.

Promote your Page too