Management From the Top Down

I am not a hair chick.  Never really have been, probably never really will be.  My one foray into hair chick-ness was back when I worked at Wendy’s in Bryan/College Station, Texas.  My running buddy Mike talked me into having my hair done by his friend who worked at the cosmetology school.  I ended up with a beautiful, body-permed, burgundy mullet, which he would do each day before we went out (I also bought my first curling iron at his urging, and yes, occasionally I did my own hair).

Fast forward too many years later, and I became frustrated with trying to find a good hair style (I have a natural wave and no matter what the haircut I seemed to end up with Farrah hair) so let my hair go, and as they say, I also had “let myself go”.

My good friend Diane bought a piece of artwork from me, and as she handed me the payment she said “I want you to use this on yourself”.

Well, Alyson Hannigan (Willow from “Buffy”) had just gotten a cute bob with a slight wave.  I thought it might work on my hair.  I lucked into finding Amy at Regis, and was happy for many many years.  The hair was also part of a “top down” makeover at the time, which ended with me over 100 pounds lighter and much healthier.  I thought I was an “after with a vengeance”.

Life intervened, in the form of hormone upheaval (mine) job upheaval (my husband) and just general upheaval.  In the middle of not knowing when the next regular paycheck would arrive, my hard-earned new regime slipped a little.  Instead of tomatoes and brown rice, I found myself nibbling on the cookies I was baking for the local coffee shop; and instead of walking five times a week, I found myself sitting on the sofa or at the computer.  Haircuts also went by the wayside, as I chose to use what windfalls came my way on other, longer lasting items.

Today, I got a real haircut and style.  Tomorrow I am buying a packet of funky stickers at Target (part of the weight loss/getting in shape regime involved the very simple yet satisfying act of putting a cool sticker on my calendar each day I worked out).  My friend Lucky bought me a basic yoga DVD last year for my birthday and I have already been laying down some stickers.

Here I am with my new haircut: 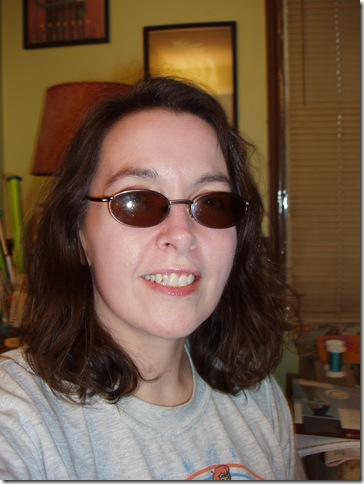 (I also bought some of that makeup Ellen has been advertising for, as I swear by my Oil of Olay Regenerist Serum; did I also mention I am not a makeup )

Who knows? Maybe I will look into some hot rollers next!

I know how it is with keeping your self up, I'm challenging myself everyday to do the same. I love the hair cut. It suits you, looks great.

May I say, "you look maaahvelous" darling! Now, practice some hugs in the mirror. We all need self-confidence lessons from Lucky, who is the best I know at being herself.

Hey I have the same kinda hair!!!But too bad mine doesn't behave like yours...
Blessings,Flora

Andi Stern
I make art, so you don't have to.

Promote your Page too